Managing accommodation for visiting vessels is no easy task. The Sydney Harbour Trust has helped manage, improve and preserve the Port of Sydney with its commissioners having power to regulate movements within it as well as cargo handling in general; but eventually Darling Harbour (which had deeper water) grew into an important ‘working’ harbour because there are rail freight services nearby too! 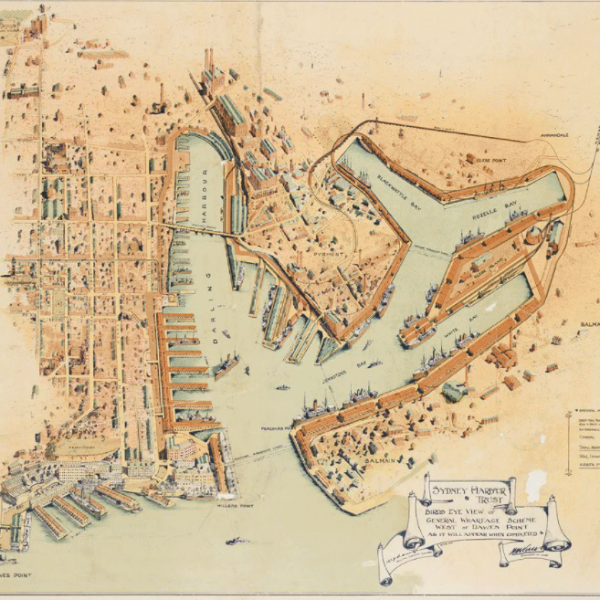 Europeans called it ‘Cockle Bay’ for similar reasons. It gained its present name in 1826, in honour of Governor Ralph Darling and by then already had several wharves, including the market wharf at Market Street.

In 1855, at the dawn of railways in NSW, a goods line was built into the Darling Harbour mudflats. It was intended to go further but this took many years. However, the mudflats area was reclaimed and quickly became a 26 hectare finger wharves, industry, mills and sawmills, warehouses and markets. 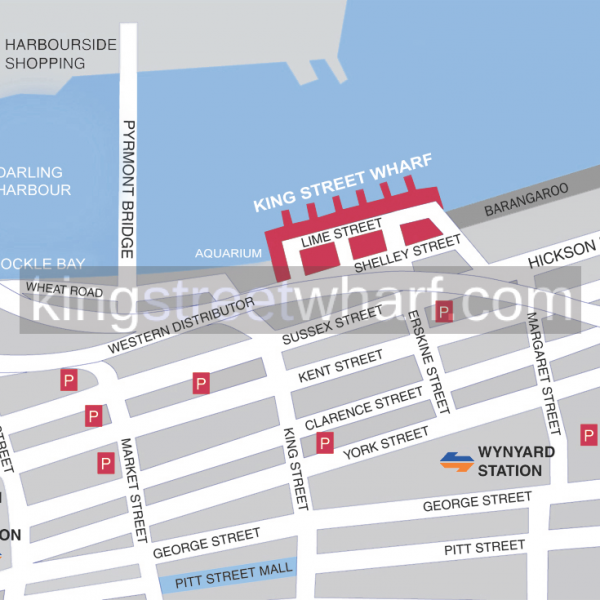 The Sydney Aquarium, one of new Darling Harbour’s oldest attractions, stands on the oldest wharf of the area, the Market St Wharf, originally built in the 1820s to land produce for the Sydney Markets up where the Queen Victoria Building now stands. Beyond it is the recently built King St Wharf area. The wharves here display a great deal of their history in interpretive signs along the way. Built on 1970s concrete container wharves 9-10, small finger wharves have now been added (and renumbered 1 to 9). The billion-dollar complex opened in 2001 with restaurants and commercial areas fronting the water, and business and residential development behind. In 2003 ferry and charter and cruise ship services moved to these wharves as well.

Lime was essential for mortar and building and, in early Sydney, came almost entirely by burning shells. The reconstituted about 1850. Similarly Shelley St is a result of the King St Wharf redevelopment, although partly incorporating former, and once appropriately named, Wheat Street.

No 8 Wharf now operates as a Passenger Terminal for cruise ships and a Function Centre. Thereafter, the great flat container and roll-on, roll-off wharves 3, 4, 5, 6 and 7 are still operating for the moment as Sydney Harbour’s last container terminal. The future of these 22 hectares of flat waterfrontage is already being planned as residential, commercial developments with significant public space. In 1800, this length of waterfront was a quiet bay reaching in to Sussex St. By 1900, it was a mass of small wharves for ferries commuting to the west of the city, and for colliers, cargo and passenger steamers, tugs and tall sailing ships.

Early in the twentieth century the entire bay was redeveloped by the Sydney Harbour Trust’s massive reconfiguration of Sydney wharves from Dawes Point through to Pyrmont, building large modern finger wharves. In their turn, these were replaced in the 1970s by the great flat concrete hardstands of today which filled in the entire bay and effectively extended the city 400m westwards. Their role was to accommodate containers, but the heavy road traffic this generated was becoming a problem in Sydney. The subsequent development of Port Botany pulled most cargo shipping around to Botany Bay and the wharves around the western harbour were progressively consolidated and closed, leaving only this site.

Development Application 22-09-98 approved the “demolition of wharf structures including overseas passenger terminal on Wharf 10 and construction of Stage 1 of the redevelopment comprising six of the nine parcels being parcels 3, 4, 5, 7, 8 and 9 (as identified in the Master Plan for the site) for residential, retail, hotel, tourist and charter boat activities, waterfront promenade and associated infrastructure”.